There were 2 questions I had confronted myself with when I was reading these passages. They are:

·         Why did the unmanifest space energy started pulsating and became absolute time?
·        What did the unmanifest space energy contain? Was it a point of singularity as the modern scientists wanted us to believe? If so then how much mass was concentrated in that point which is obviously very difficult to believe.
The answer to the first question is here “The self unfolds itself for its self – Bhagavad Gita”. There is no convincing answer to the rational mind as to why the consciousness which was passive decided to become dynamic and started pulsating. The best answer i have come across is it was its ICHA SAKTHI that made it to pulsate. So let’s leave this for the time being.
But the second question is answered very comprehensively. But before we get into the details of what it is, I want you to check the diagram at the end of the blog very closely. This gives the overall picture of evolution and the five stage process. I also want you to recollect the “EGG” state which is called as the GUNA state where in the form and sound manifests. They say that this pulsation started with OM. This OM as popularly believed is just not an aural form but also has a visual form and that is light. We will discuss about this later in detail.
But let us focus on the actual second question as to what the contents of this Space energy were:
·         The space is filled with Paramanu or Microbodes which are tiny particles. These are the God’s (Higgs Boson) particle our CERN scientists are after. http://en.wikipedia.org/wiki/Higgs_boson
·         ·         Now, we are probably a year away before CERN publish the results when this blog is published. I would not be surprised to see the results of that experiment is closely aligned with what is available in our scriptures and produced in this blog.

·         The primal manifest form of the unmanifest is a square (primal wave pattern). This is the shape of the Paramanu or Microbode. This is very luminescent, means filled with light and on a 3D plane this shape is a Square Cuboid.
·          A Square Cuboid is a shape which is equal in all sides – say of unit measure which is the smallest measure possible and has 6 faces, 8 vertices, and 12 edges. You can start figuring out in hinduism, why the idols of Lord Shiva and Lord Muruga has six faces, 12 eyes, hands etc.
·         You may want to note that 6 faces can be represented in 2 ways as below. The second picture becomes a Star of David in 3D which has 6 faces and 12 edges, popularly known as Tetrahedron. So don’t be surprised if the Boson Higgs particle is of the same shape. 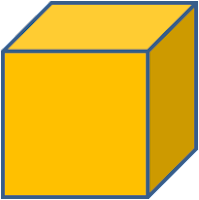 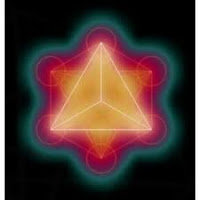 ·         The free space is packed with cubical atoms of energy. They are building blocks of the structure of the universe. So what is clear is that all these atoms existed in a “resonant state of non-vibration” before the so called “big bang” happened or the pulsation started.
·         It did not burst out of a single point as popularly believed. Alternatively, in space every point is the center. When the pulsation started these cubical atoms underwent a shape change and manifested as shapes and forms.
·         This cube is called as micro-abode called Sittravai / Chittrambalam (mini hall in Tamil). This is secret in Chaidambaram Sage Appar (Chidambara ragasyam) realised out. Chidambaram is a Shiva temple associated with Space energy and when you go to sanctorum you would not find any idol but just empty space with some lights there. This is to signify this concept of Paramanu which is luminescent and is a Cuboid in shape. This is the smallest particle possible and can be called as ‘God’s particle”.
·         The micro space, in the cubical shape is foetus, Garbha or Bindu. This is known as Vinkaru in Tamil.
·         This micro abode is the repository of light and sound.
·         The free space is Light and the Light is Moolam or source of the universe and universal forms. Light is Brahman, Atman, Vastu Brahman – Nunporul in Tamil.
In the subsequent blogs we will correlate String theory, Brahma Sutra, Nataraja, Vishnu and how they are all contained in order and proportion in pulsation.
Happy reading!
Ref: Fabric of the universe, Jessie J Mercay. (This is a good book in English which sums up these aspects very nicely. The author i understand was a student of Late. Dr. Ganapathi Stapathi.
Posted by Thinking Hearts at 9:30:00 AM