Well!, If you think the topic is pretty wacky, please read on to know the similarity between them. Anyone who has been following cricket especially in India and England would know the following images and the incident behind them. 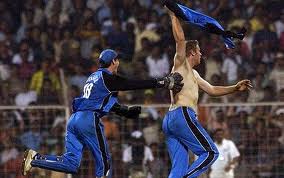 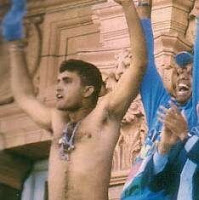 One is Andrew Flintoff taking his shirt on the field at Calcutta after winning a match against India and the other Sourav Ganguly returning the favor at Lords, just about a year later in 2002. If you want to quickly relive those moments, you can do it here.. http://www.youtube.com/watch?v=4JqxGDXcd7w . Huge discussions followed whether Sourav was right in baring his chest and the act of aggression is right or not? For me that match and sight was one of the most memorable moments, not because i like a single pack ab and hairy chest but that moment redefined Indian attitude in the cricket field. Till then Indian cricket had the best talent in the world yet lacked the fire power, aggression or the "Go for the Kill" attitude and mostly surrenders meekly in the field.

I know few friends who still don't agree with what Sourav Ganguly did, but the topic of this blog is not about who don't agree, but to look at couple of such scenarios. No. I am not going to talk about the F TV heros here but instances which were so exciting that they forgot or ignored their very own self in excitement. 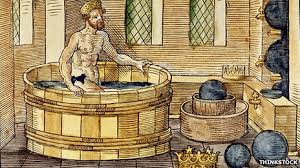 The first one is Archimedes who 2200 years ago understandably ran naked from his bath tub. He was so excited on seeing the upward displacement of water as he stepped into the tub that revealed the so called "Archimedes principle". It is told that he ran naked in the streets in excitement and it was probably not a calculated move like Ganguly's.

Secondly, I came across this song from Kamba Ramayanam while reading something and a similar incident appears in Ramayana. The act of baring their clothes in excitement is done by Devas (Angels) when they hear the news on death of Price Indrajit (s/o. Ravana).

The valor and skills of Indrajit has been very highly praised in many places and after the war Sage Vishwamitra tells Lord Rama that you killing Ravana is not as important as killing his son Indrajit. Such was his valor. Devas were very concerned that how Rama and Laxmana are going to defeat him. The following song is the reaction of Devas on hearing the death of Indrajit.

The meaning goes as follows:

When Indrajit died the devas were happy that Ravana can be defeated then in excitement they disrobed themselves and threw their dresses in the sky. When they did it they resembled the Jain monks. It is important to note that Kambar refers to the Jain monks as people who follow Ahimsa and non-killing as a principle and to negate the self and the attachment to their body then used to roam around naked.

The line by line meaning in Tamil is given below to those who are interested. Courtesy www.tamilvu.org.

To conclude this blog, Sourav's act seems to be more matured and moderated compared to the other two though all the three seems to have loads of excitement and a sense of achievement.

As a wise man said, "There is a very thin line between genius and insanity" and excitement seems to be a perfect enough reason to erase that thin line... many times over.