Lets look at some aspects which are widely debated:


In Tamil Nadu there are some "rational" species which does not believe in Ramayan or Rama but claim that Ravana was a lower caste and Rama was a Brahmin and the entire story is of oppressive past India had. This along with the next argument needs to be trashed.

The next argument is Ravana was a Tamilian (Dravidian) and Lord Rama was a north Indian (Aryan) and hence Ramayana is all about Aryan supremacy story over Dravidians. The Aryan invasion theory has been comprehensively debunked and the other theory that Aryans migrated from Europe / Russian is also sent to dustbin at the same breath.

The birth place of Ravana is not mentioned in any scriptures as Tamil Nadu or Sri Lanka nor it is said that Ravana's mother tongue is Tamil.  It is popularly believed that Ravana was born in the current day village of Bisrakh, closer to Noida in North India. Geographically Ravana is more north Indian than Lord Rama as Noida is north of Ayodhya :). Please note that he displaced Kubera and captured Lanka. 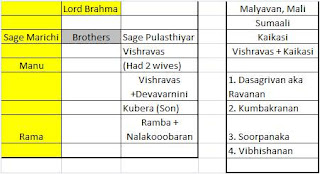 One of Lord Brahma's sons is Sage Pulasthiyar and his great grandson is Ravana.

Ravana's father Vishravas, had 2 wives, one was Devavarnini whose son is Lord Kubera, the god of wealth.

Long ago, Srilanka was ruled by 3 demon kings Malyavan, Maali and Sumaali. It is told that Lord Vishnu displaced them from throne and they ran for their life. Demon Sumaali's daughter Kaikasi enamored Sage Vishravasa and got 4 kids - Raavanan, Kumbakaranan, Soorpanaka and Vibhishanan.


This Mayan and South american Mayan with the famous 2012 calander are the same and you can read about it here... http://ragsgopalan.blogspot.in/2012/01/time-space-series-part-13-south.html


That's all about lineage and relationships. Lets come to few info bits on Ravana's history:

This is one of my favorite songs. Kambar describes Soorpanaka as "Like the congenital disease which is born along with us, but waits for the right time", the meaning goes that she came as if she was a congenital disease for Ravana and was bent upon uprooting him. The beauty of this song and the depth of the meaning is simply amazing! You can consider this as Curse no.5

So Ravana's future was firmly linked to his past deeds and the same is true for all of us. These 5 curses would partly explain the questions like why Devas came as monkeys, Why Ravana could not force his way with Seetha or just the number of people who were earnestly waiting for his demise!

We will continue in the next part.

Disclaimer: Just compiling my understanding here with a disclaimer that there are minor variations between multiple scriptures but writing here what appealed to me. Shall be open to any suggestion or corrections :)

Praja means people, you would note that the root "Pra" associates with Prana (Life force), Prani(Living being), Pran(Life) etc.

It is said that Brahma created 21 Prajapatis (the count is 17 according to Valmiki Ramayan) and they are responsible for the creation of the entire living beings in this universe. Hence in one way we are all distant relatives as I am going to prove that Ravana and Rama were also relatives :).

Lets consider just the 2 Prajapatis Sage Marichi and Sage Pulastaya among the 17 or 21 as the case may be. Since they are sons of Brahma they are brothers. Sage Marichi's lineage through King Manu and "Ikshavahu" is the Solar dynasty or Surya Vamsa. I am enclosing the list of kings under Surya Vamsa starting from Brahma. Please enlarge the image.

Scriptures say that there were 42 main kings of Surya dynasty ruled for approximately 3 million years. Collating from different sources including Kalidasa's Raghuvamsa i have listed 58 kings in Raghu Vamsa. I still could not find references to Musukundan and Sibi and they are not part of the list, though you may find that they are part of the dynasty as per Kamba Ramayana and the relevant songs are listed below. The duration is Satya and Treta yuga put together - 3024000 years to be precise. You may be interested in this article too.. http://ragsgopalan.blogspot.in/2012/10/breathing-rhythm-of-king-dasarath-lord.html


Sage Vishwamitra helped King Thrisangu (No. 8) by creating a separate world for him and the same Sage helped Lord Rama. These Sages lived through the ages and had conquered death.

In the next part we would see the lineage of King Ravana and the relationships.

In Kamba Ramayana, Sage Vishwamitra introduces Lord Rama to King Janaka and he talks about rama's ancestors.. I am producing few songs which I like.

Lord Ranganatha as the deity in form has been given by Lord Brahma to King Ikshavahu for the benefit of mankind. This is the deity in Srirangam today.

Planet Saturn is known in many names across the globe - Kronos in greek, Kevan / Kaivan in Persia and "Sanischara" in India. In some cultures Planet Saturn was considered as one of the chief deities and in India it has been one of the devata in Navagraha!.

The actual Indian name for Saturn is Sanischara which became Saniswara and in short Sani / Shani. Char means move / movement, Chara means mover and Sani means slow and is named based on the definition Śanayē Kramati Saḥ (शनये क्रमति सः), the one who moves slowly. The slowest mover among the 9 Grahas is Saturn as per vedic astrologer and hence this name was given.

As you are aware Vedic astrology does not consider Pluto, Uranus and Neptune as planets affecting our lives. I shall write the reason behind this later but would like to highlight that the vedic astrologers were very well aware of these planets but did not take it into consideration for ASTROLOGY since they are too weak and far away to affect our lives through their radiation.

Since saturn takes 30 years for one full round the sun, so in each house it stays for 2.5 years. So for 12 zodiacs 30 years. Sade Saath / 7.5 years of Sani / ஏழரை நாட்டு சனி refers to transit of Sani in your Rasi (where the moon is at the time of your birth) the previous and next rasi. In short if your Rasi (moon sign and not sun sign) is Virgo then Sani in Leo, Virgo and Libra is the Saade Saath period for you.

You may note that the duration of one day decreases suggesting the planets rotate around their axis faster as they move away from sun and Venus is the only planet whose day is longer than the year. So, you get 12 months in a day in Venus, Yeah 12 salaries in a day for the salaried class and monthly, quarterly, Half yearly and annual sales reviews all in a day :)

You also note that Mars is the closest to Earth in terms of duration of a day and hence this may be one of the reasons as to why NASA is looking for possibility of life support in Mars.

But the point i wanted to highlight is the Indian / Vedic nomenclature contains the very reason as to why something is named so.

Bhoogol means study earth / geography, Bhoo means earth and "Gol" means round / circle suggests that Indians knew that the earth was round ages back.

Brahmaanda means universe, Brahm - Very big and Anda means Egg. So universe is a huge egg suggesting it is elliptical in shape.

Let me conclude that many languages and ancient civilizations are rich and have named things based on a reason or meaning lets be inquisitive to understand the roots / meaning behind a name.