Mahamuni Mayan was the father-in-law of Demon King Ravana and is referred in both Mahabharata and Ramayana. He is attributed with building the palace for Yudhishtar in Indraprasta and also the architect for Sri Lanka which Ravana ruled. His son Nalan helped Lord Rama build the Ramasethu – the bridge between India and Sri Lanka. He is believed to have lived in the Ilamuridesam popularly known as Lemuria continent (Kumari Kandam) which spanned 4500+ kms from Sri Lanka to Antartica connecting current Australia, Africa and Americas. Check out http://www.sacred-texts.com/atl/tll/index.htm

Understandably when this land mass was consumed by the sea their clan moved to different parts of the world including Guatemala, Egypt, and to current south Indian region. This explains as to how we find common science across India, South America and Egypt.
He has written books in both Sanskrit and Tamil and I am going to produce the list of technical works he has created and look at the contents of a specific book called Surya Siddhanta. Just the list of works and also the topics in Surya Siddhanta is amazing, highlighting the depth of science we had at that time.
http://www.youtube.com/watch?v=PZKiCpFisoY 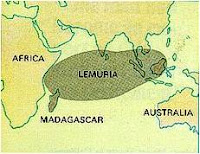 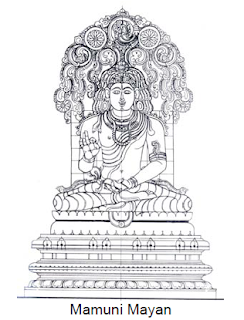 Figure 49: Mamumi Mayan
Mayan is also attributed with the start and spread of Temple culture in India. The song below in Tamil states that since Mayan sat under the Banyan tree and taught this science of universe and also of the sacred arts, so that every town was endowed with Temples for social betterment. Because he was from the southern region and also he sat under the Banyan tree, he is also equated with Lord Dakshinamoorthy.
ஆலமா மரத்தின் கீழே  அருள் மயன் அமர்ந்ததாலே
ஆலமா மரத்தின் கீழே அருட் கலை வளர்ந்ததாலே
ஆலமா மரத்தின் கீழே அறிவர்கள் வளர்ந்ததாலே
ஆலயம் ஊரும்தோறும் அமைந்தன செழிக்கநன்றே!!
The Mayan says in his Pranava Veda verse one:
“Om Light and Om Sound are the Primal Source of all manifest forms. Om Light is aroused by its own effort in a state of disorder and appears as a flame. The state of Om Light and Om Sound in Space is a magnificent luminous six – faced Light form that is called “murukoli”. The transformation of Om Light and Om Sound through the five stages is concealed in the five fold knowledge, of which, this is the first. This process of transformation of disorderly Om Light and Om Sound into orderliness is found in all five fold material forms.”
Sage Veda Vyasa says in the Bhagavatam, “eka eva pura vedo pranavha sarva vangmayha” (9th skandha, 14th chapter, sloka 48 of Bhagavatam). This means that there was only one Veda called Pranava Veda. It is believed that Sage Vyasa created 4 vedas from this Veda since he believed that the oncoming generations would not have the mental strength to master everything.
Technical works
The following are technical works written by Mayan and represent the 12 vowels of the Tamil language:
·         Ovia Chennool                  - Treatise on Drafting and Painting
·         Sirpama Chenool              - Treatise on Iconometry
·         Kattida Chennool             - Treatise on Architecture
·         Nilamanai Chennool       - Treatise on House Building based on quality of land
·         Manainila Chennool        - Treatise on Land based on the nature of house building
·         Baniyal Chenool                - Treatise on Astro Physics
·         Perunata Chenool           - Treatise on Divine dance
·         Muligai Chenool               - Treatise on Herbs
·         Ganitama Chenool          - Treatise on Mathematics
·         Arakkala Chenool             - Treatise on Ship Building
·         Vinkala Chennool             - Treatise on Space Ship
·         Elisai Chennool                  - Treatise on Science of Music
MAYAN, in Aintiram states that:
"There exists an order in the Universe - subtle universe, and material universe. This power is attributed to the consciousness of the cosmic space as well as of the inner space of the animate beings. This consciousness, by its personal effort to express its own inner feelings, causes a kind of vibration or pulsation in the inner space, resulting in energy-grids. The vibration or pulsation, being the causal element of all these events, is called KAALA. This is actually the force of energy aroused by the inner consciousness, causing waves and contributing to the growth of living forms. This KAALA resides in all living beings. So, space is the offshoot of the vibration of the primordial energy. This is how the space was born. All forms of nature are manifest forms of subtle energy. For all to get manifested, the force is KAALAM. This wave-form frequency realm is the creative element of the universe."
There is no other treatise that we have in our possession today which is dated 10000 BC that depicts the secret of nature so explicitly and gives the unmanifested interconnections and mathematical proportions between everything in the universe.
As Dr. Ganapathi Sthapati rues “Unfortunately most of the Tamil experts don’t understand the science in these texts and hence these books are idling without anyone extracting the truths from it”. In the next few generations when we are less equipped in our own mother tongue we may lose this treasure completely just like the many we have lost so far.
Hence the first step we need to ensure is even if you are not equipped well in your mother tongue please make sure that your kids can read and write it well. This becomes our most important duty. And I find it worrisome when someone is indifferent to the fact that they can understand their mother tongue but cannot read and write.
With some significant efforts we can and we should prove that this man who said, “Indians are the most ignorant about their rich past and scientific traditions.” is not wise any more.
Happy reading!
Posted by Thinking Hearts at 7:51:00 PM