Let’s look at how Octet and the primordial rhythm (Adi Tala) that defines Sculpture. Let’s recap some of the following:

The process of evolution starts with Pranava which has aural and visual forms. We have also seen that anything subtle is represented in a 8x8 energy grid and anything gross is in 9x9 grid.
·       The fundamental measure with which the particles bond is Eight or it’s multiple and hence the primordial rhythm is an Octet.
·         The fundamental measure of time is Tala and the primordial Tala is Adi tala with 8 units and a pattern of 1, 3, 2 and 2.

(Figure 36: Human form – Adi Tala, Nava Tala Courtesy: Dr. Ganpathi Sthapati)
Now let’s see the measurement rules as to how to make a sculpture of a human being.
·         The overall human height is measured as 9 talas. Yes the same time measurement is used to measure height. Pinch yourself now, since height is a space variation and not a time variation yet it is measured with a metric of time. This is a secret which is unknown to many and even some of the experts in this field. This is where Time and spaces merges without any difference and this is the fundamental rule we create visual and aural structures in the universe.
·         Divide a man’s height as 9 units of which head, torso, thigh and legs would fall into the pattern of 1, 3, 2 and 2 which adds up to 8. This is the primordial rhythm – the Adi Tala now as a human form.
·        Then how 8 became 9? No other branch of Vedas or science tells us this secret so explicitly to my knowledge. The following parts, Top of the head to forehead, Neck, Knee and feet each measure 0.25 talas and hence add 1 additional tala to 8 and it becomes 9. So Adi tala which is a subtle version of human becomes Nava Tala which is the gross version of human being. In the process of 8 becoming nine all the joints are formed in the bodyJ.
·         Let me add one more dimension to this. Our human body has a gross body (Sthula) and a subtle body (Sookshma sarira). The Sthapatya veda tells us that the gross body is nava tala and sookshma sarira is Adi Tala.
·         I fell off the chair when I understood this and the linkages. Check if you are still on your chair and maybe you should sit on the floor from now onJ.
Martial Arts and Lord Nataraja’s stance:
Let me ask you the following questions here:
·         Look at the image of the Lord Nataraja below. If a gross image should have Nava Tala which is a 9x9 grid then why the human image of Lord Nataraja which is a Nava Tala fitted into a 8x8 square instead of a 9x9 square?
·         Both in Classical dance and in martial arts why do they ask you to stand in a posture where the knee is slightly or significantly bent. Not all of the stances but most of the basic stances correspond to this why? Let me know if you have received a satisfactory answer for this question. 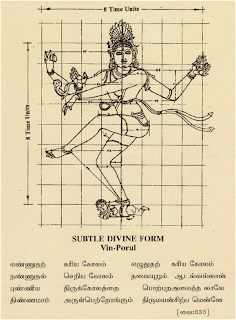 (Figure 5 reproduced)
The answer to this question reveals one more secret to us.
a.       In Sthapatya veda each grid line is divided into 10 or 11 or 12 (usually 12) and hence a 9x9 grid has 9*12 = 108 blocks or levels of energy. This may explain why 108 is a sacred number from an energy perspective. This covers the entire spectrum.
b.      When we create a gross image its always sculpted to 9 talas but when they sculpt image of the gods and in this case Nataraja, they fit the gross image to a 8x8 energy grid to invoke the subtle energies.
c.       How do they fit a 9 tala to 8 tala? The technique is not to change the proportion of nava tala but they ensure that 9 fits into 8 by making the image to bend it legs such that the height reduces by one unit.
·         You can notice that Lord Nataraja’s right leg is bent to fit the image in 8x8 grid. This is believed to invoke the subtle energies corresponding to that image.
·         This is the same reason why martial arts and in Bharatnatyam your teacher asks you to take a basic stance which reduces the height from 9 units to 8 to invoke subtle energies. Of course the other reason is the alignment and focus to Hara / Dantein with that pose.
If I tell you that the science of nature and the associated philosophy codified in Hindu religious symbols are unmatched and amazing then I hope you would whole heartedly agree now. These religious texts and symbols offer the key to unlock the secrets of nature.
So to sum up, so far we have seen one variation of time as Gandharva veda that manifests as classical music and the primordial rhythm is Adi Tala. Next we saw that the Sthapatya veda in the form of sculptures offered the secret of space variation in Adi Tala and Nava Tala.
This is where Time and Space were equated with the same measure yet offered completely different arts.
The whole universe has these underlying and un-manifested interconnections and hence the Hindu philosophy of “That one became many”… is the supreme truth. Seeing the divinity in everything is the only truthful way of recognizing this science.
As a wise man said, “Indians are the most ignorant about their rich past and scientific traditions.”
Happy reading!
Posted by Thinking Hearts at 8:17:00 PM