This is my favorite part and you might find it long.

“The self unfolds itself for its self – Bhagavad Gita”.
This self unfolded itself with a pulsation and this pulsation is the start of Absolute time (KAALAM). As I said nothing to my knowledge tell us clearly as to why this pulsation happened. This is the point of singularity in the scientific language and the event is termed as Big Bang. Just as I expressed earlier it was an event of primordial pulsation and not of an explosion which threw away mass because of the explosion into the space.
The entire space existed with its subatomic particles and this pulsation made the space to vibrate and this vibration was rhythmic and led to the evolution of this universe. Popularly known as “That one became many”… and ..Vastur eva Vaastu.
This pulsation happened because of the Pranava or the first pulsation resulted in the Pranava are both conceptually right. So at the time of this primordial pulsation 2 things happened:
·         The absolute time started. This is called Kaalam.
·         Primordial and the most sacred Pranava emerged.
Both these happened simultaneously and it is futile to ask whether Kalam created Pranava or Pranava created the pulsation. In many of the texts it offered as Pranava that created the pulsation. So let’s go by that.
·         This is the reason that Pranava / Primordial Om is so sacred in Hinduism.
·         This Pranava had manifested in 2 forms:
o  Luminescent form as OM the Light. This is the source of all visual forms. The primordial form is represented as ஓம் in Tamil and ॐ in Sanskrit.
o   Aural form as Om the sound. This is the source of all aural forms. I should say that this is the more popular form compared to the luminescent form.
Now this concept is very important, since in the Pranava meditation they say us to meditate on the silence after the word OM. They say it starts with silence and merges into silence.
So, when I say that sound merges into light, it is all the aural form merges into ITS luminescent form. All luminescent forms merge with the Paramaanu which is also luminescent. I am reproducing this passage again for emphasis and clarity.
·         Sage Thirumoolar states brilliantly that who realizes that the light (physical light which means the world) merges with light (subtle light), he has realized SIVA.
ஒளியில் ஒளிபோய் ஒடுங்கிய வாறும்
தெளியும் அவரே சிவ சித்தர் தாமே - 124
I have read many times over to understand this concept and I would suggest that you allow this concept to sink in.
Now let’s come to the 8x8 energy grid of the Paramaanu and imagine that it is pulsating because of Pranava and this Pranava has both light and aural form.
·         They say that this pulsation is rhythmic and symmetric.
·         When something is Symmetric, then there has to be a central line along with the Symmetry comes. For example if our right and left sides are symmetric then the body is divided along the sternum & backbone. This thread in a human body is called kaya madya Sutra.
·         Within the 8x8 energy grid / hall there is a vertical luminous shaft called Brahma Sutra (Oli nool). Sutra in Sanskrit and Nool in Tamil means Thread / String.
·    This Thread of light /Olinool / Brahma Sutra is a shaft of consciousness also called Moolathoon / Moolasthambham.
·         This shaft of consciousness vibrates in a particular order called rhythm. This is the order of nature.
·         This rhythmic vibration of the shaft of consciousness is the dance of Shiva, the CELESTIAL DANCE / THE COSMIC DANCE / THE DANCE OF EVOLUTION of the LORD NATARAJA.
Look again at the picture of LORD NATARAJA, he is drawn inside a 8x8 Manduka mandala (now you know what it is), his left leg is raised suggesting a movement from left to right. Imagine that he is going to land the left leg to his right side.
Why should he suggest that he is moving from left to right?

His left hand holds light / fire and his right hand holds Drum / Damru / Sound. The process of Evolution which starts with the absolute time and Pranava is fantastically represented pictorially. It suggests that the evolution process starts with the rhythmic dance of the PARAMAANU in a 8x8 energy grid and this process evolves first as light and then as sound. This light and sound creates further forms and the entire universe.
It is very easy to answer as to why sound evolves from light? We all know that the light is at a higher velocity than sound. This is the same reason we see lightning first then hear the thunders.
So let’s summarize the DANCE OF EVOLUTION of LORD NATARAJA:
·    From being un-manifest the Pranava emerges. Or the Pranava evolves the un-manifest to the manifest and starts the cycle of evolution.
·     This leads to a pulsation which is called as the COSMIC DANCE / CELESTIAL DANCE / DANCE OF EVOLUTION.
·         This pulsation is rhythmic and symmetric.
·     The luminescent shaft of consciousness is called as Brahma Sutra or popularly called as String theory in the modern science.
·       The process of creation evolves from the dance as light then sound evolves from light and then all the visual and aural forms in this universe.
If this is so then the process of dissolution should be that all sound merges with light and instead of left leg, Lord Nataraja’s right leg should be lifted suggesting a movement from right to left isn’t?
Look at the majestic picture suggesting the DANCE of EVOLUTION and the DANCE of DISSOLUTION as below: 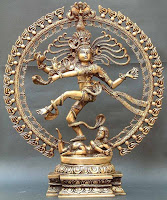 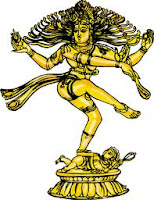 In my opinion there is nothing more scientific in this world that is pictorially represented about the evolution of universe. You should read a book called “The Tao of Physics” by Frijat Capra where as physicist he explains how he experienced this and highlights the dance of the quantum particles in space corresponds to the dance of Lord Nataraja.
Now this central shaft of Consciousness is called Brahma Sutra and according to our scriptures every Paramaanu  has this string, which means every being, matter, inanimate things in this universe including the tiniest of subatomic particles have this string / sutra. In the future parts we will see the Maths behind this sutra and the pulsation but let us look at what the modern science says about Superstring theory here, http://en.wikipedia.org/wiki/String_theory. You can read it how many times ever you want but this theoretical postulation is a direct adaptation of the cosmic dance and our Brahma Sutra and nothing more.


Now check out Lord Nataraja at the CERN - http://www.fritjofcapra.net/shiva.html
As a wise man said, “Indians are the most ignorant about their rich past and scientific traditions.”
Now you may understand as to why I started this series with the above line. We have a very rich past that is most scientific and it is left codified in a form across thousands of temples in India. Let us just open your eyes and understand the scientific meaning around it.
If you are so far surprised at our richness and advancement, please wait till we will get into real hard core mathematics and geometry of our nature in the subsequent parts.
Happy reading!
PS; Thanks to website owners who have contributed some of the images i have uploaded. :)
பரம்பொருள் எங்கும் உண்டு பெருங்கலை யாண்டும் உண்டு
பரம்பொருள் உணர்வினாலே ஒளி வழிபாடு கண்டேன்
பரம்பொருள் அருளினாலே திரு நடராசன் கண்டேன்
பரம்பொருள் அருளினாலே பெருங்கலை படித்தேன் காண்பீர் !! (வை 1166)
Porul in Tamil means particle / thing and meaning. Same way in Sanskrit Artha means Wealth (remember Arthasastra) and meaning.  Paramporul denotes Lord Siva. This is the prayer song and its meaning goes:
Siva (God's particle) is every where, its greatness always exists
By the realization of Siva i saw the primordial light & prayed
By the grace of Siva i saw the dance of Lord Nataraja
By the grace of Siva, see i am creating this great piece of work (his book)!!
Posted by Thinking Hearts at 11:15:00 PM