If you don’t know what is vesica piscis, please google and you would find it interesting. I am not going to explain it here and I would focus on the summary and aspects which are often left out. The philosophical aspect of Vesica Piscis, is a rotating point becomes as circle of unity. Two circle of unity (with its radius as unity) interacting / intersecting each other in a perfect manner offers an overlapping area which is considered to be sacred and fundamental to all the geometric forms in the universe. We will first see how √2, √3 & √5 are part of this Vesica Piscis.

Please look at 2 circles who radius is unity and AB = 1, intersecting as per the diagram. The overlapping area ABCD is the Vesica Piscis and we can see √2, √3 & √5 all part of this Vesica Piscis.

ABPQ and ABRS are 2 squares and the side of the square is 1.  √5 is as significant as √2 and √3. In the diagram here √5 is the diagonal of the rectangle PQRS / diagonal of 2 squares – one below the other.
Figure: Vesica Piscis
√5 is the regenerative factor that binds 2 squares or that factor that transcends to worlds or the bonding factor for 2 cosmic entities. This √5 shall take us to the most important ratio which is the Golden mean or the God’s ratio.
But before that let me share what stuck my mind when I was engrossed with Vesica Piscis and √3. Look at the pictures below. These are pictures of forehead marks of Hindu Brahmins sects called Iyengars and their supreme deity is Narayana. I correlated the striking similarity of the rectangle around the Vesica piscis and Iyengar’s namam. You just have to imagine the 2 overlapping circles are the right and left side of the face with the Vesica Piscis starting from the top tip of the nose. To me the formative principle of √3 is in line with the “Bhootha krut” and “Vishwa karma manu stvashtha” aspects of Maha Vishnu as per Vishnu sahasranamam. I had a good laugh on this correlation. 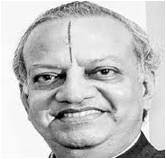 Consider a line of unit length and also consider two segments a, b so that a+b =1.
A and B are such that it has to fulfill this condition of Proportionality that a/b : b/1.
(Figure: Line andF)


This means what ‘a” is to “b”, is the same as what “b” is to the whole length which is 1.
Mathematically resolving this equation a/b : b/1, hence b2 = a and hence b= √a. This means a + √a = 1. The answer to this equation is only one value which is called the Golden mean / God’s ratio denoted by F = 1.6180339… and a = 1/F. Philosophically it is the division of unity and the only possible creative duality within the unity.
You may ask as to why unity is not divided into 2 equal parts and why is should be 1/F (0.6180339..). This is effectively answered by our Upanishad “Whether we know it or not, all things take their existence from that which perceives them”. Adi Shankara said “the universe is an illusion / maya” because it is what we perceive. We tend to ignore them as philosophy or superstition.
But let’s look at it scientifically as we understand. When the unity is divided into equal parts there is no asymmetry and difference and hence there is no perceptual universe. An asymmetric division is needed to create the dynamics necessary for progression and extension of unity.
Let’s summarize our understanding again:
·         √2 – the generative component and a multiplying factor creates multiple squares from a unity of square.
·         √3 – the formative component that creates multidimensional polygonal shapes from a cube.
·         √5 – the regenerative component or the binding component that transcends and binds both the worlds.
·         F - Golden mean or the God’s ratio, which is an evolutionary principle that is guided from within and an indisputable mathematical evidence of the conscious evolution of this Universe.
·         F -  Is a self-similar variable which can be used to derive Unity and it is the only proportion by which the Primordial rhythm maintains it perpetual oscillation to sustain this universe.
·         Relation between F and √5 is, F = (√5+1)/2 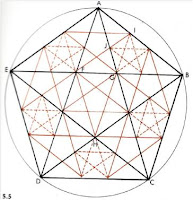 If you are interested more please check out the Fibonacci series and its relation to F. The importance of 5 is dominant in every living organism while 6 and 8 are the characteristic of mineral and inanimate structures. It used to be rule of thumb that any plants / flowers which has 5 petals is an edible plant and hence 5 and pentagon are the symbols of life which contains the God’s ratio or the golden mean.
Now let’s also understand how a √5 is related to √2 and √3. If we consider a right angle triangle with the base of √2 and height of √3 or vice versa then the hypotenuse is √5. This is the binding factor. I shall produce below some pictures which are aligned based on pentagon and the web is replete with them for you to understand more.
These 2 parts were little heavy and I shall move to easier aspects on the universal rhythm from next blog. The point I was trying to make is that everything in this universe is subject to a proportion and its fractals and let’s see the manifestation of it in our daily life.
Happy reading! 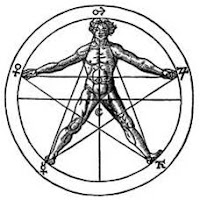 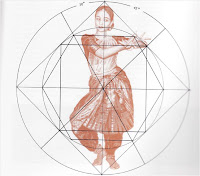 Bhartnatyam and human body alignment. (Courtesy; Robert Lawlor, The Sacred geometry). The gravity is aligned at the "Hara". 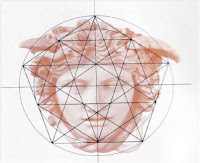