The importance of time (Kaalam) is so high in the Vedic tradition that they ensured that both the accuracy of time and the easy measurability of it is maintained for who knows how many years. Time creates, sustains and destroys everything and this is very nicely captured in these 2 lines:

காலமே எவைக்கும் மூலம், காலமே மூல ஆற்றல்
காலமே கோலத் தோற்றம், காலமே ஞாலத் தோற்றம்
The god of time is Kaala Bhairava – a form of Shiva and hence both Shiva and Yama the lord of death both were known as Kaalan. The time is represented by number 13 and it belongs to Kala bhairava. We will see the interesting linkage between Vedic system and the Mayan calendar found in Guatamala and Mexico later.
Swami Chinmayananda states that “Time if the periodicity between 2 thoughts”. Nothing captures the concept of time more wisely. What is clear from our scriptures and Swami Chinmayanda is that time is the pulsation that creates this universe. It is the vibration with very accurate periodicity and our sages suggested that you can live beyond time provided you manage to escape the effects of that pulsation.
Einstein’s view on time and its relativity is very realistically captured in this quote “When you are courting a nice girl an hour seems like a second. When you sit on a red-hot cinder a second seems like an hour. That's relativity.” More than relativity I found that the root cause of relativity is the pulsation of mind as time. Einstein on a serious note proved that our view of time is not absolute, it is relative and it is a continuum with space. We will in the next few parts of this blog would see that time and space are the same or Time = Space.
Aintiram states that there are 5 things that vibrates which are generally not under our control. They are Space, Earth (vibration of earth is gravity), Eye lids, thoughts and Musical notes and very nicely put in Tamil as (Vin)விண், மண்(man), கண்(Kan), எண்(Yen), பண்(Pan). Pan is musical metre / chandas and Yen is the yennam or thoughts.
Let’s look how intricate our measurements time are in Vedic system: (Check the image below)
·         The smallest unit of time is approximately 2 micro second.
·         The largest unit is about 155 trillion years.
·         Brahma’s linear age is 50 years and in currently in his 51st year which makes the universe to be 155+ trillion years. Brahma’s life time is 100 years which means it would be 300 trillion+ years of universal life which follows a cycle.
·      After 100 years of pulsation cycles Brahma stays as dormant energy for the same period and then pulsates again for the next life of 100 years.
·         A Brahma's life is also known as a Para. Each half Param is referred to as a parardham. This second half is termed as 'dviteeya paraardhe' (the second half of Bhrahma's term) is stated in all vedic rituals.
·    After every Chatur yuga, the world recycles. After every 2000 years / a Brahma day the world dissolves and remerges. The important point to note is that there is no CONCEPT OF CREATION here. It evolves and dissolves as per the science of pulsation. We also note that this pulsation expands and contracts. This cyclical nature of time as believed in Indian mythology refers to time as 'anaadi' or that without a beginning.
While doing Vedic ritual the time and space coordinate is invoked to say that you are doing this ritual at this place in the universe and at this time – with reference to Brahma’s age to the time and star of the day. This tradition is unbroken and the Indian Almanac can predict the position of astronomical objects without any error for thousands of years without any sophisticated instruments and space ships.
On the contrary just read the history of the Gregorian calendar which we are following here, http://en.wikipedia.org/wiki/Gregorian_calendar
There is neither accuracy nor continuity and to top it up there are authorities who reform the calendar as if time stops and waits for them to affect that reform.
Why should we ignore the best of time science that we have for a inaccurate, discontinuous reformed calendar?
As a wise man said, “Indians are the most ignorant about their rich past and scientific traditions.”
Happy Reading! 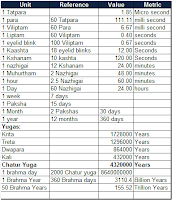